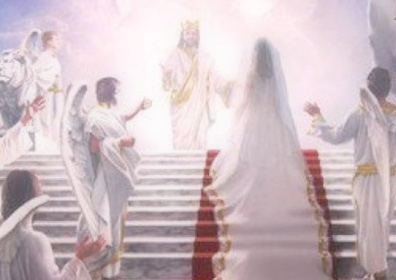 “And one of the seven angels who had the seven vials full of the seven last plagues came to me and talked with me, saying, Come here, I will show you the bride, the Lamb’s wife.” Revelation 21:9

What is the deep desire of a father? To see his son married! The wedding of Jesus the only begotten son of God was in the mind of his Father from eternity. This awesome dad of Jesus is obsessed with the idea of getting his son married! He has been thinking about it over and over, this glorious wedding was rolling like a tape in his mind and imagination! The wedding planners and organizations of our days are countless and they do their best to arrange weddings according to each couple’s budget. But if there is one in the universe who really knows how to plan for a wedding it is the heavenly FATHER, he is the expert and there is none like him! Abraham sent his faithful servant to look for a bride to his son Isaac and made him swear not to return empty hands because he so longed to see his son married and he found him one, Rebekah! The other spiritual facet of this story points to the heavenly Father who sent his faithful Holy Spirit to search for a Bride for his son Jesus and he found him one, YOU! “The king’s daughter is all glorious within; her clothing is trimmed with gold. She shall be brought to the king in clothing of needlework; the virgins, her companions after her, shall be brought to you. They shall be led with joy and gladness; they shall enter into the King’s palace.” Psalms 45:13-15. Oh, how beautiful the bride of the lamb is (Song of Solomon 4:7), how beautiful and holy the perfecting of the saints that the Lord is doing in our hearts preparing us for the wedding!

Read in Ezekiel 16: 7-14 God’s heart toward his wife, toward you, it will stir your heart with so much passion and love and will connect you to the heart beat of your heavenly groom: “I helped you to thrive like a plant in the field. You grew up and became a beautiful jewel. Your breasts became full, and your body hair grew, but you were still naked. And when I passed by again, I saw that you were old enough for love. So I wrapped my cloak around you to cover your nakedness and declared my marriage vows. I made a covenant with you, says the Sovereign LORD, and you became mine. “Then I bathed you and washed off your blood, and I rubbed fragrant oils into your skin. I gave you expensive clothing of fine linen and silk, beautifully embroidered, and sandals made of fine goatskin leather. I gave you lovely jewelry, bracelets, beautiful necklaces, a ring for your nose, earrings for your ears, and a lovely crown for your head. And so you were adorned with gold and silver. Your clothes were made of fine linen and were beautifully embroidered. You ate the finest foods—choice flour, honey, and olive oil—and became more beautiful than ever. You looked like a queen, and so you were! Your fame soon spread throughout the world because of your beauty. I dressed you in my splendor and perfected your beauty, says the Sovereign LORD.”

Jesus loves his church in a way we can’t fathom, you can just foretaste a little bit of his extravagant love for you through the revealed word of God. Song of Solomon is such a concentrated love letter between Jesus and his church. The time is approaching, the wedding preparations are coming to an end, and the church is getting ready to be raptured after being captured by his love … Jesus is coming soon!

P.S: Don’t be among the attendants, become his bride! Receive Jesus now in your heart!

An Amazing Experience
Scroll to top