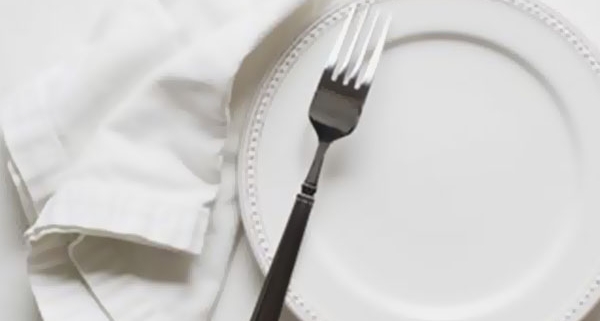 “Then Simon Peter, who was behind him, arrived and went into the tomb. He saw the strips of linen lying there, well as the burial cloth that had been around Jesus’ head. The cloth was folded up by itself, separate from the linen.” John 20: 6-7

When Jesus rose from the dead, he took some time in his tomb to fold his face’ cloth and laid it separate from the linen he was buried in. Our Lord does things in wisdom to communicate to us a love message. So why did Jesus fold that napkin and put it away from the linen? Is he leaving us a message here?

In order to understand the significance of the folded napkin, you have to understand a little bit about the Hebrew tradition of that day. It is believed that if the master of the house was done eating, he would rise from the table, wipe his fingers, his mouth, and clean his beard, and would wad up that napkin and toss it onto the table. The servant would then know to clear the table. For in those days, the wadded napkin meant, “I am done”. But if the master got up from the table, and folded his napkin, and laid it beside his plate, the servant would not dare touch the table, because the folded napkin meant, “I am coming back”.

Whether this tradition is true or not, Jesus promised us many times in the bible that he is coming back for sure. His second coming is near and who knows maybe while I am writing this devotion he appears!

“Men of Galilee,” they said, “why do you stand here looking into the sky? This same Jesus, who has been taken from you into heaven, will come back in the same way you have seen him go into heaven.” Act 1:11

I tend to believe that the folding of a napkin next to a meal means, “I am not done eating, I am coming back”. When Jesus folded his face’ cloth after his resurrection, he laid it next to the linen his body was buried in and what is the broken body of Jesus Christ than the bread of life? The unblemished lamb of our Passover? The Lord’s body is the real meal of life! Jesus is not done; he is coming back for another round. Don’t clear the table church, spread the gospel, feed the nations THE bread of life, shed the light of God’s salvation to every soul sitting in the dark, as long as it is day do the work of him who sent you. Yeshua is coming back …